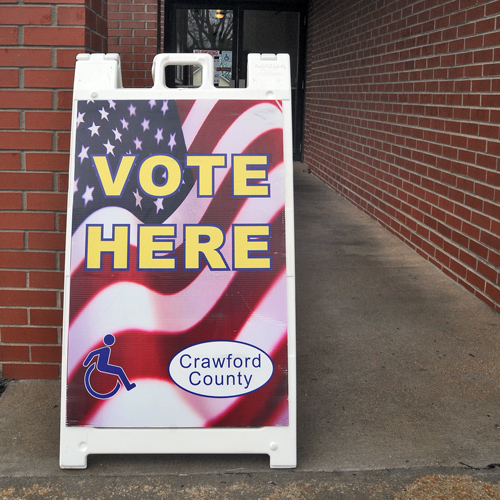 Voters at the polls on Tuesday said yes to Prop S, chose Stephen Kimker for a seat on the E911 board, and selected Sharon Hubbard as alderwoman for the City of Steelville.

The district’s plan for Prop S funds is to implement a facilities improvement plan that includes the construction of a new elementary gym, razing of the old middle/ high school building, a new elementary entryway, and the addition of a new drop-off and pick-up area to be used for both the elementary and middle schools. The district needed bond proceeds in the amount of $3 million to complete this project.

The proposition had to have a 4/7ths (approximately 57 percent) majority to pass. There were 429 “yes” votes, and 88 “no” votes, which translated to 82.66 percent of the votes in favor of the proposal.

Stephen Kimker will take a seat representing District 1 on the Crawford County E911 Board of Directors. Kimker challenged incumbent Paul Crow for the position. Kimker received 471 votes in the election, while Crow received 347 votes. Crow had represented District 2 for a number of years until it was discovered while filing for this year’s election that he actually lived within District 1. Because it was an unintentional mistake, legal counsel advised it was not election fraud and he could seek re-election, but in the correct district. Carol Hofstetter ran unopposed for the open seat in District 2 and will join the board this month.

For the City of Steelville, Ward 2 Alderwoman Sharon Hubbard will retain her seat on the city council. Hubbard received 44 votes, while her challenger Jennifer Hurd received 31 votes.

Incumbents Tim Mullen and Jason Evans were the only candidates who filed for the two open seats on the Steelville School Board. The two were on the ballot, but as there was no contest, both will continue on that board for another three-year term. Mullen still received 370 votes, and Evans had 392 votes.

Comments will undergo moderation before they get published.