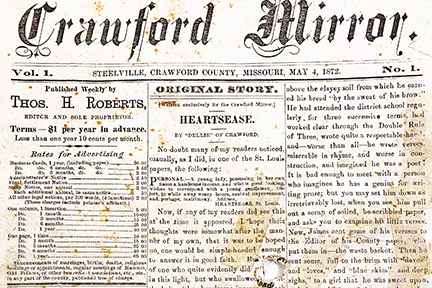 Three Rivers Publishing will officially turn 20 years old in 2022, but that’s not the big newspaper anniversary staff members will be celebrating. One of the company’s three weekly newspapers will be marking its 150th anniversary in the spring.

The First Number, Proper.
Today, we issue the first number of the Mirror, the advance sheet circulated by us ten days ago being intended merely to show the form, size of pages, general style, terms, etc., of the forthcoming paper, and only to be used as the first number in case we should find the patronage extended to us would not be likely to justify any immediate material change or enlargement. But the present issue fully settles the matter. Our most sanguine expectations have been realized. We commence the Mirror with a larger subscription list than any paper printed in the County has yet started with; though we have not yet been able, owing to domestic misfortunes, to canvass personally more than half the County.
We return our sincere thanks for the very liberal encouragement given to our enterprise, and promise to do all in our power to merit it. Although our eight pages already contain as much reading matter as most country papers, and more than some, we intend, as soon as our daughter is able to resume her position and the younger typos are sufficiently advanced to perform the necessary labor, to double the present number of pages, giving subscribers to the Mirror 16 pages per week—forming in one year a book of 812 pages—and all for the extremely low price of one dollar! Why at that rate every man in the County can and ought to be a subscriber. Not only so, but everyone who has friends abroad should have a copy sent to them.
Subscribe for the Mirror—only $1 a year—the cheapest County paper in the State!!
We give five percent cash to persons setting up clubs. Send in the names as fast as obtained, with the money, reserving the five percent.

On April 20, 1872, Roberts announced the Mirror would begin publication, noting that “Mr. S.T. Suddick at his Drug Store, will receive subscriptions, advertising and job work for the Mirror.” His “prospectus” edition also noted that the Mirror “will be to all intents and purposes, a local county paper, devoted to the true interests of the people of Crawford. Taking Progress, Truth and Right as its guide, it will strive to follow wherever they lead the way.
“While the Editor will not hesitate to express his views and convictions on leading questions as they may arise, he will endeavor, in the discussion of important matters affecting the general welfare of the people, to obtain, and hopes to receive, the advice and assistance of wiser heads and able pens than his own.”
The Mirror was first published in magazine form, approximately 8.5 by 11 inches in size so it would be both easy to read and expand, allowing the publisher to easily add more pages when needed, and could be more easily bound into a book for preservation.
“With this introduction we submit the ‘Mirror’ to the people of Crawford County, asking for it as liberal and generous a support as our friends may believe and our efforts prove that it may deserve.”
The first edition included information on its printing business, noting that “Horse and Jack bills, handbills of all kinds, bill-heads, circulars, cards,” and more could be printed with the “utmost promptness.”
The first edition also included stories about a two-headed calf being born in the area, planned improvements in Steelville (including work on the Masonic Hall), the removal of the Post Office from the Courthouse into its own building, work on the railroad coming from Cuba to Steelville, information on the Scotia Iron Works and a bakery in Cuba, an outbreak of meningitis, a column on crocheting with detailed instructions on how to make a “Ladies’ Work-Basket,” and more.
For the entirety of 2022, the top banner of the Steelville Star-Crawford Mirror will have a new look, mirroring the font of the original publication from 1872. Also this year, the newspaper will be featuring articles that appeared in the newspaper over the past 150 years, along with features on significant events in local history.
A special edition of the Steelville Star-Crawford Mirror is planned for May 5 to officially observe the paper’s anniversary.