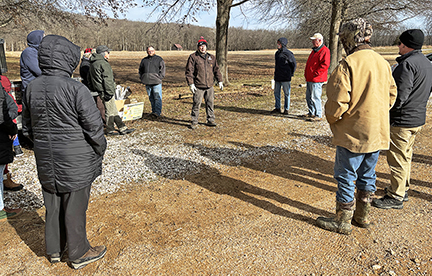 A group of about 25 area volunteers ventured into the wind and cold Sunday afternoon at Maramec Spring Park to plant six acres of wildflower and native grass seeds as part of an ongoing pollinator habitat project at the park. This was the second planting in a multiyear project to convert about 150 acres of fields in the park into habitat that supports local insect populations.

The first planting in the park took place in the winter of 2020 in a field to the right of the main entrance of the park. This latest planting was done in the next field to the west, along the left side of the campground road to a line of trees that breaks up the fields in the main lower section of the park.
In June of 2019, Maramec Spring Park officials announced the Park had received a grant made by The New York Community Trust through The James Foundation to support a planning partnership with the Xerces Society for Invertebrate Conservation to determine how best to convert former hayfields and other parcels at the park into habitat for migratory monarch butterflies and other threatened species.
The Park is now also partnering on the project with the Wildlife Federation and Conservation Federation of Missouri and received a roadside grant to help pay for seed. More plantings are planned for this winter using a tractor and seeder with plans to get another 59 acres done.
Leading up to the wildflower and native grass seeding, the main fields in the park were planted in soybeans over the past two summers. Using soybeans as a cover crop and keeping them weed-free enabled those areas to be rid of nonnative plants so that the native pollinators will have a better chance to thrive.
Native flower and grass seedings are done in the winter because the seeds require freezing and wet conditions in order to germinate. Once they are planted, most species will begin growing the next summer, but it typically takes three years before they reach their maturity and begin flowering at their fullest. This first field that was planted should reach its peak this summer.
The pollinator project is being completed in response to the fact that the Eastern monarch population has decreased by between 60 to 90 percent since the mid-1990s. The butterfly depends on wild milkweed, which has been decimated by changing agricultural practices and increased use of herbicides. Experts believe that creating new habitat along the butterfly’s migratory pathways is critical to the future health of the population.
Monarchs are the only butterfly species to migrate annually in North America; their multigenerational migration spans from Canada to Mexico. Maramec Spring Park is located along one of the main migratory pathways monarchs use to fly north and south every year, making it generally well-suited for monarch conservation efforts.
The Park is also on the edge of the monarch spring breeding territory essential to their northward migration. As a result, the Park could play double duty in supporting the life cycle of North America’s migratory monarch butterflies, while also providing healthy habitat for dozens of other pollinator species, including the endangered Rusty Patched Bumble Bee.
The Xerces Society for Invertebrate Conservation is providing technical assistance and planning support for the effort. Established in 1971, it focuses on pollinator conservation, pesticide reduction, endangered species, and aquatic systems through applied research, advocacy, education and policy changes. Since 2008, Xerces has restored or protected 692,000 acres of pollinator habitat on U.S. farmlands.
Once the pollinator habitat is fully established, Maramec Spring Park staff will create trails, making it accessible for hikes and interpretive programs. In time, officials say they hope it will become a model for other large-scale efforts to create pollinator habitats in Missouri.
The volunteers who participated in Sunday’s seeding each received a bag of wildflower and native grass seed and also had the opportunity to take some milkweed seedlings to plant on their property. 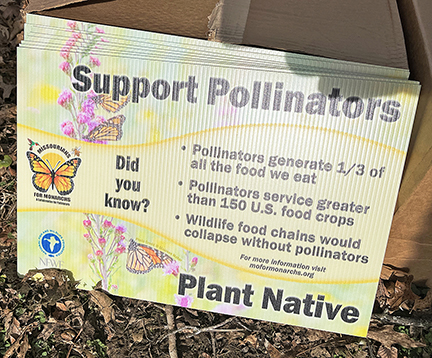 Pollinator information signs will be placed in areas within Maramec Spring Park where native planting has been completed. 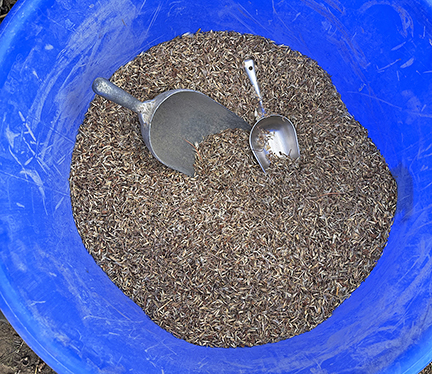 Native wildflower and grass seed were mixed together and then combined with pelletized lime before volunteers spread it on the field. 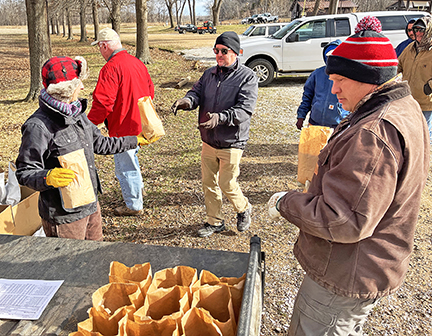 Volunteers lined up across a field at Maramec Spring Park on Sunday afternoon before walking across it and spreading seeds to complete the Park’s latest pollinator planting. About 60 acres of native grass and wildflowers will be planted in the Park this winter. 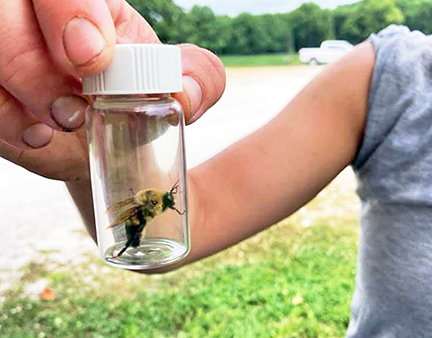 As part of its ongoing pollinator project, staff members at Maramec Spring Park and volunteers conducted a bee survey for the Missouri Bumblebee Atlas in August. 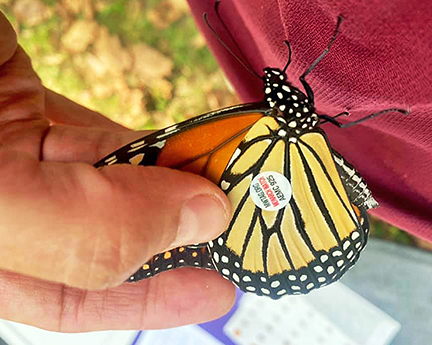 As monarch butterflies passed through the area in late September, several were captured at Maramec Spring Park and tagged before being released and allowed to continue their migration.