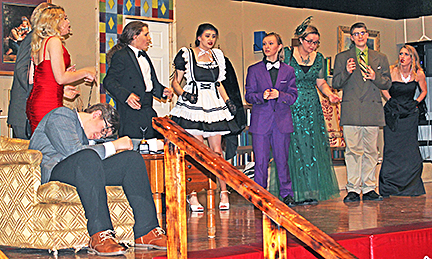 The description of the story line on Playscripts.com is, “It's a dark and stormy night, and you've been invited to a very unusual dinner party. Each of the guests has an alias, the butler offers a variety of weapons, and the host is, well…dead. So whodunnit? Join the iconic oddballs known as Scarlet, Plum, White, Green, Peacock, and Mustard as they race to find the murderer in Boddy Manor before the body count stacks up. Based on the cult classic film and the popular board game, Clue is a madcap comedy that will keep you guessing until the final twist.”
The play is based on the screenplay by Jonathan Lynn, written by Sandy Rustin, and produced by special arrangement with Playscripts, Inc. It includes additional material by Hunter Foster and Eric Price. The show is based on the Paramount Pictures Motion Picture which is based on the Hasbro board game CLUE. The original music is by Michael Holland.
The director was SHS teacher Natalie Pyatt. She was assisted by teacher Sarah Honse and Student Director Dalton Hutson.
In her director’s note in the playbill, Pyatt thanked the community for supporting their efforts to perform this play. “We have worked diligently to be able to produce this show. It is by far the most expensive and intensive undertaking of any show I have directed, but this community and this cast and crew have stepped up and provided tremendous support. Any time that we have asked for help, the community was quick to act. We couldn’t have done this without you,” she said.
The playbill also included thanks to sponsors and those who assisted with making the production a success.
Cast members were: Wadsworth played by Stephan Harris, Yvette–Chloe Light, Miss Scarlet–Kiarra Evans, Mrs. Peacock–Regan Martin, Mrs. White–Sophie Case, Colonel Mustard–Anja Bumba, Professor Plum–Lynna Cassidy, Mr. Green–Carter Mason, Mr. Boddy–Mya Evans, The Motorist–Hayden Marshall, Chief of Police–Abby Woodall, The Unexpected Cop–Cyrus Smith, The Cook–Aaliyah Crider, Singing Telegram Girl–Skyler Brand, Backup Cop–Haylee Woodall, Backup Cop–Jaden Roach, McCarthy–Skyler Brand, Newscaster–Baylee Eliott.
Crew members included: Stage Manager­–Jaden Roach, Light Technicians–Georgia Pitts and Elise Hoselton, Sound Technician–Isabelle Johnson, Stage Ninja–Baylee Eliott, Property Master–Katelyn Halbert.