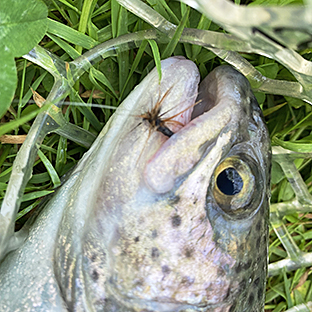 All fly fishermen dreams of rising trout. It’s that magical moment when the olive green and black-polka-dotted back of a hefty rainbow breaks the surface film in pursuit of a struggling mayfly that embraces the hearts of fly fishermen. It’s the stuff of dreams.

Casting a fly to a rising out is as good as it gets in fly fishing. However, there is a great deal of thinking and preparation that should be exercised before making that first cast to a rising fish.
A rising trout is a feeding trout. They may simply sip the surface making a slight dimple in the water or may fly completely out of the water only to come crashing down on an unsuspecting aquatic insect. Then there is the roll, the wake, the cruise by, the smash, and a dozen other trout maneuvers in their fishy attempt to eat.
A trout’s approach to feeding tells you little if anything about what the fish is attempting to eat. Unless the insect is large enough to be visually seen by you, you are at the mercy of the fish until you figure it out.
This first step of attempting to catch a rising trout is where the majority of anglers foul up. Rather than walking up to the creek bank and heaving whatever you have tied on at the moment towards a feeding trout, take a deep breath and observe for a few minutes.
You need to determine if there is more than one trout feeding. If so, where are they located in relation to your position and how often are they rising?
Allow yourself a good 10 minutes of observation before making your first cast. Are the insects the fish are feeding on large or small? Dark or light colored. On the surface or slightly below.
For the purposes of discussion let’s say the insects are minute, the size of a mosquito, and dark colored. Hopefully you studied bug and hatch charts for the stream you are fishing prior to making the trip.
In Ozark streams those tiny, emerging insects include a wide variety of aquatic insects emerging to complete their life cycle. Of the 1,116 insects found in Missouri, hundreds are associated with watery environments. However, you may reduce the insects of concern to four basic groups when it comes to fly fishing: caddis, mayfly, stonefly, and midges.
Knowing the life cycles of each of these classifications of aquatic insects improves your odds of catching trout, because each of these groups spend a part of their life cycle on the bottom of the stream before rising and emerging from the stream. They are fish food at every step of their life cycle.
Simple dimples on the surface may be an indication that trout are feeding on pupae as they rise towards the surface. Trout often intercept these pupae and eat them before they complete their journey. Pupae may struggle in the film on the water’s surface while attempting to morph into the adult stage of their species. They are sitting ducks for hungry trout.
The description I gave of a mosquito sized, dark insect on the surface above is most likely a midge. Midges are the most prolific of all trout foods and are found in almost all rivers and lakes rivers where trout live. They consist of insects that range in size from a gnat to a mosquito. The midge’s life cycle consists of three stages: the larva, pupae, and adult.
Many fly fishermen ignore midge patterns and do not fish them, because they are so small. Most commercial patterns range in size from #18 to #28, extremely small. It will definitely take a pair of magnifiers over the glasses for most anglers to be able to tie these minute bug imitators onto a tippet.
The larvae state of midges wiggle frantically when disturbed on the bottom. Give your midge larvae imitator fly a little movement when fishing it. The pupa wiggle as they slowly rise to the surface via the aide of trapped air bubbles under their skin. Slight movements of your pupae flies will again incite strikes. Adult midges often cluster up on the surface, or pair up as mates. A Griffith’s Gnat pattern is a great imitator of an adult midge.
Recently, I arrived at Maramec Spring Park around 10 a.m. The day dawned cloudy with predictions of rain. Very few fisherman dotted the stream.
Determined to make a day of it, I hiked downstream to get away from other anglers. As I walked along, I noticed a trout rising to the surface making an audible splash as it sucked in an insect.
I walked to the stream’s edge and sat on a rock to observe. Seconds later a small dimple appeared 10-feet from me. A small brown trout sipped an invisible to me insect from the surface. Then another rainbow and another rose in similar fashion.
Minutes later I identified some of the dark insects as adult midges. A hatch was on.
After establishing several feeding lanes where trout were rising consistently, I tied on a #16 Blue-winged Olive pattern, which matched the hatch reasonably well, and I could see it.
I made my first cast to gain a little distance. On my second cast the olive floated softly to the surface. I mended my line to get a drag free drift. I saw the shadow of a nice trout rise from the depths. It followed the olive for three feet, then smashed the surface inhaling my fly.
What a rush. The powerful fish made numerous runs stripping fly line from my reel easily. I reveled in the moment of having fooled a trout with a dry fly.
I repeated the process over and over as trout continued to feed. I moved perhaps 40 feet up and down the stream in four hours, enjoying the abundant bug hatch and resulting astounding fly fishing. I hooked up on dozens of trout from 12-to 19-inches.
It proved to be one of the most magical days of fly fishing I had enjoyed in some time.