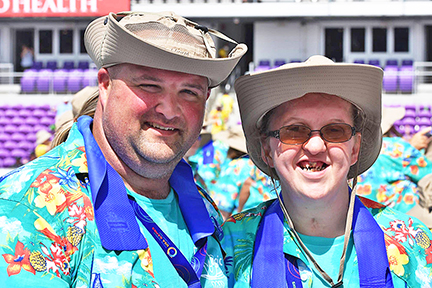 By Diego Branda
Special Olympics Missouri marketing and communications intern
The relationship between law enforcement and Special Olympics Missouri has an extensive history. Whether it be organizing a Law Enforcement Torch Run event or managing a Polar Plunge, law enforcement has built a lasting friendship with SOMO. Hundreds of officers from around the state volunteer to help at events annually, and some even coach and compete with the athletes.

Jeff Fugett, Master Sergeant with Missouri State Highway Patrol, has been involved with Special Olympics Missouri since 1999.
“I was the new guy at that point, and so through my organization, the Missouri State Highway Patrol, I was able to learn about the Law Enforcement Torch Run,” Fugett said. “They said ‘Hey new guy, you’re going to start selling shirts for us,’ and so I did that every year. I started meeting more and more people from Special Olympics, and (my involvement) has grown and grown ever since. Now, I’m on the committee for the Law Enforcement Torch Run.”
The Law Enforcement Torch Run, which is heralded as the largest law enforcement-focused charitable organization in the world, is an opportunity for law enforcement to increase awareness and raise money for Special Olympics athletes.
Earlier this summer, Master Sergeant Fugett was given an opportunity to participate at the 2022 Special Olympics USA Games. He played on the Kansas City region’s flag football team alongside his girlfriend, a former Special Olympics Missouri employee.
“We applied to go, and we were picked to represent Missouri as part of one of the flag football teams,” Fugett says. “I’ve been lucky enough to go to the World Games once and now this being my third USA Games. Being a Unified partner completed everything I set out to accomplish with Special Olympics.”
A Unified partner is someone without intellectual disabilities who participates alongside athletes with intellectual disabilities. There are nine Unified Sports offered at Special Olympics, all designed to bring together equal numbers of athletes with and without intellectual disabilities on the same team.
Fugett wasn’t the only officer given an opportunity to join Team Missouri in Orlando. For Joe Peart, a corporal with Missouri State Highway Patrol, his involvement started in 2010 when he was asked to hand out medals to athletes at a regional event in Waynesville. He had helped at various events throughout his life, but this was really when decided he wanted to become more involved.
“So I became a coach,” Corporal Peart said. “I started coaching a local track team here in Crawford County and was eventually approached by Susan Shaffer (SOMO employee). They were selecting athletes to represent Missouri at the USA Games.”
Peart, along with two of his track athletes, were given the opportunity to make the trek to Orlando and compete.
“For us it was emotional, stressful,” Peart said. “Just being there and seeing the athletes not only compete but grow as individuals. There’s a lot more athletes there compared to regional and state events, so the competition was fierce. I was nervous not for them to compete, but for them in general. I think sometimes I was more nervous than they were.”
Peart says his relationship with SOMO athletes continues to grow. Both sides have great appreciation for each other.
“The athletes are very appreciative of what law enforcement does. They are grateful for what we do for them, and we are grateful for what they do for us,” Peart said. “Whether it be us handing out medals for them at events or simply visiting Special Olympics Missouri headquarters, they are very appreciative of law enforcement in general.”
Peart was able to describe the relationship between Law Enforcement and Special Olympics Missouri in one word: “Family.”