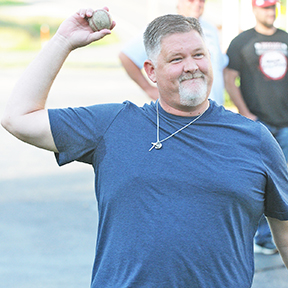 By the time he came to Steelville last Friday, Dan Bryan’s story had been told by numerous media outlets, including ESPN, MLB Network, The Athletic, People magazine, and The Today Show. It may not have been as well-known, however, to members of the Steelville High School baseball team who gathered at the Meramec Music Theatre to hear Dan’s story and play a game of catch.

SHS Baseball Head Coach John Simily reached out to me via email on August 5 to let me know about the planned event. “Not sure if you are familiar with Dan Bryan, and his story where he lost his son, and plays catch to honor his son,” John wrote. “He is coming to Steelville to play catch with the baseball team. Let me know if you want to come.”
I knew Dan’s story…and wouldn’t have missed a chance to meet him.
If you don’t know Dan’s story, it’s one of loss, heartbreak, healing, and self-discovery. And it’s not a lone journey. In lifting himself out of tragedy, Dan has touched the hearts of hundreds—many who share his pain and others who suffer through their own.
When Dan gathered with the baseball team, their family members, and other coaches from Steelville at the Music Theatre, he shared some of the national stories about him that have been done. Via YouTube and a projector, the crowd learned more about Dan from stories done by The Today Show, ESPN, and the MLB Network before Dan shared his journey.
Dan’s life was forever changed on September 16, 2020, when his 16-year-old son, Ethan, was killed in a wreck shortly after leaving baseball practice at West County High School in rural Park Hills. Ethan loved baseball, his friends, Marvel movies, video games, playing board games with his family, singing, and listening to music and West County School District, where he was on the Student Council and a member of the choir, his obituary read.
The day Ethan died Dan was returning home from work and thought he would have time to watch the end of his son’s practice during the fall baseball season at West County High School. As he arrived, he was just able to see Ethan get one final hit, a solid one-hopper off the right-center field wall that ended an intrasquad game. They waved at each other in acknowledgement and Dan went home after seeing that Ethan was going to stay late for some extra pitching practice. A short time later, he got a call from his ex-wife about the wreck.
Dan went directly to the scene of the wreck and initially thought Ethan was not seriously hurt but was confused why nobody was helping him until they put a sheet over his son’s body.
“I just fell onto the highway,” Dan recalled.
That evening the school lit up the baseball field to honor Ethan and a crowd began to gather to show their support for the family. Dan went to the gathering at about 9 p.m. and said about a couple hundred peopled were there. He felt it was important for him to be there as a show of support for them in their grieving.
Ethan’s casket was placed behind home plate on the West County High School baseball field for the funeral service, which Dan spoke at. “I can’t remember what I said. It’s all a blur,” he said. “I haven’t even watched the video from it, but I think I’m about ready to watch it.”
The school set up about 525 chairs for the funeral and lot of people had to stand for the service. On the way to the cemetery, Dan recalls seeing purple ribbons (the West County colors) lining the highways and people standing along the road to give their respects.
Something happened after the funeral that had a profound impact on Dan’s life and his journey moving forward. As a strange twist of fate, what Dan believes was one of many things that have happened to strengthen his faith, a book was waiting for Dan in the West County dugout.
Just weeks before Ethan’s wreck, author Ethan D. Bryan had published his book “A Year of Playing Catch,” about his quest to play catch every day for a year, the lessons he learned, and the connections he made while doing so. While searching for a book review on the internet, Bryan had inadvertently come across Ethan’s obituary and seeing that Ethan had been a baseball player he signed a copy of the book and sent it to the school for Ethan’s family.
It was about a year before Dan could even bring himself to read it.
“When I first picked up the book I was searching for answers and I decided to honor Ethan by playing catch with people and talk about him and I found out people have really connected with the faith-based meaning of my mission,” Dan told the crowd at the theater. “Other people have opened up about their own experiences and we have come to help each other.” 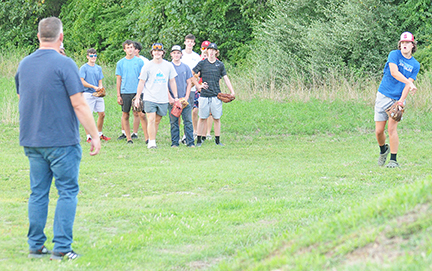 Dan Bryan came to Steelville last Friday to play catch with the SHS baseball team. It was his 273rd game of catch in his quest to play 365 straight days of catch to honor his son who was killed in a wreck in September of 2020.

Dan began playing catch—using Ethan’s glove and a ball recovered from the crash site—with the goal of having a catch with someone every day of a year. On Friday, it was his 273rd game of catch.
He has played catch with many of Ethan’s friends and family members, groups, people he has connected with through social media, and complete strangers he met on the street. All have learned his story and he has learned theirs.
Some of the encounters have been profound.
While on vacation and with an extra glove, Dan saw a man across the street and asked him for a catch. The man agreed and after listening to Dan’s story shared his own tragic loss of the daughter he lost in a car wreck.
And as part of the MLB Network story, Dan was invited to play catch with Albert Pujols and throw out the first pitch at a St. Louis Cardinals game. It was all planned weeks in advance in order to clear a spot for Dan ahead of the game. It ultimately happened on June 24, what would have been Ethan’s 18th birthday.
He’s even played catch with a man from Israel who planned his whole vacation around it. “I’ve played catch with full baseball teams and a group of 40 people,” said Dan. “The journey was about playing catch for 365 days and I’ve played with far more people than that.”
While speaking in Steelville, Dan recalled how important baseball was in Ethan’s life. It was so important that Ethan actually asked his father to move from the North County School District in Bonne Terre to West County when he was about to start middle school because he knew West County played both spring and fall baseball.
Ethan always worked hard at baseball and went from being a bench player his freshman year to the varsity squad’s best hitter in the fall of 2020 before the wreck. In his final game, Ethan went three-for-four and was upset at being called out on a close play at first the only time he didn’t reach base.
“He was very, very competitive,” said Dan. “Ethan had a great heart and I am just here to deliver his story. The greatest fear for a parent who loses a child is that they will be forgotten.”
John Simily, who got to coach Ethan at West County in the fall of 2019, echoed many of the same stories about Ethan’s love of the game. John became the Steelville baseball coach last year after leaving West County.
“When Dan spoke at the memorial, he made it about supporting the kids at the school and honoring Ethan,” John said.
Since the wreck, Dan and John have become even closer friends as they supported each other. They are so close that John is even going to be in Dan’s upcoming wedding.
“Dan has done some things I couldn’t have done,” John told his players. “It’s an honor to build relationships like I have come to have with Dan.”
At the end of Dan’s talk he asked the crowd who wanted to play catch and everyone who did grabbed a glove and headed outside the theater. Most of the baseball team played catch with Dan, as did a few adults.
As they played catch, using Ethan’s baseball, Dan asked each of the boys to share a little about themselves—how long they have been playing, what is their position, what they would like to do after high school. They had learned a lot about Dan and they were happy to let him know a little about them.
After taking a few photos of Dan and the Steelville Cardinals playing catch, I retrieved my catcher’s mitt from the truck and waited, patiently, for everyone else to finish before approaching Dan and introducing myself. I was anxious to play catch with him.
Dan asked if I had heard about his story before today and I said I had. I didn’t remember exactly when it was, but I told Dan I had watched the ESPN story earlier this year. He reminded me it was on Father’s Day, what undoubtedly had to be a tough day for him.
I told him I always try to soak up the personal stories told on ESPN, which are often about some type of traumatic event in a player’s life or how the network helped make some young athlete who is going through a serious illness have their wish fulfilled.
I recalled to Dan that while watching the story I saw a Highway 8 road sign and realized the story was going to hit close to home. I then saw one of Ethan’s former teammates wearing a West County cap and thought to myself, “Holy cow, I bet John Simily coached this kid.” By the end of the story I was crying, like I imagine many people who saw it.
As we played catch, Dan and I talked about life and loss. We talked about faith. We talked about counting our blessings and how no matter how bad we think we have it—what horrible curve ball life has thrown at us—there are many others in the world who are going through worse things than we are.
As we tossed the ball back and forth, I couldn’t help but look at the ball each time it was in my hand and think of Ethan—that he had held that ball, how many other people have held it, how many other people will hold it, and how it’s going to find a special place in Dan’s house. It made me think of something Dan has said earlier.
“After the death of a child, you realize you can’t make any new memories,” he said. “I didn’t want that to happen.”
That certainly isn’t happening. 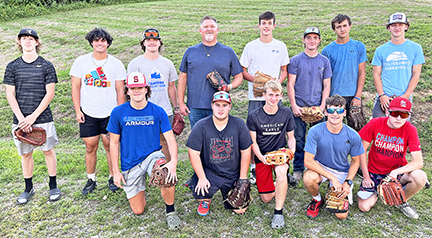