Organizers brough a few patio tables, umbrellas, lots of easels, and many local artists in for the event. The Missouri Council for the Arts was yet to be formed, yet Cuba dared to dream things that never were and say, “Why not?”
This year Cuba will be celebrating the 60th year of the Cuba Arts and Crafts festival, now known as Route 66 Cuba Fest. Things have changed over the years. Now it isn’t just a project of the Cuba Arts Council, but it is a collaborative effort spearheaded by the Tri C Club of Cuba, which organizes the event, aided by the Cuba Arts Council, which organizes the Taste of Cuba and the wine tent, and Viva Cuba, which brings the chili cookoff and the cemetery tour each year.
But the one thing that has stayed the same is the goal of Cuba Fest—bringing people together to enjoy beautiful fall weather, the history of the area and the work of local artisans and crafters.
Mark October 15 and 16 on your calendar for the 60th anniversary of Cuba Fest. 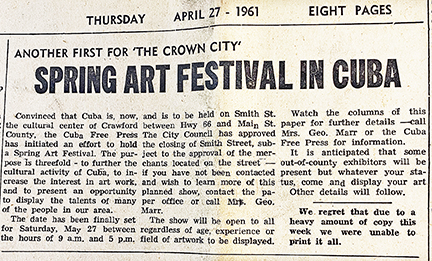 The Cuba Free Press announced the first Cuba Spring Arts Festival in its April 27, 1961 edition. The festival, which has since become known as Cuba Fest, was so well-received that it became an annual event and will be held for the 60th time this year on October 15-16.