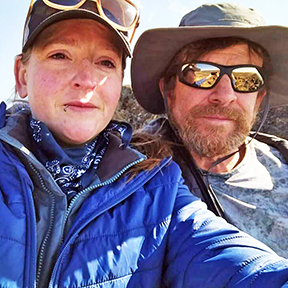 This year’s Father’s Day was extra special for one Cuba dad. He got to watch the sunrise on top of Africa’s highest peak with his daughter…and they both helped raise money for causes dear to their hearts.

Matt Cook and his daughter, Jessica, began the final push to the summit of Mt. Kilimanjaro in the middle of the night, starting their push to the top at 11:30 p.m. on June 18. They reached the summit ridge just as the sun was coming up.
It was the culmination of a journey that took seven days. It was also one that raised funds for a local nonprofit and an international one. Matt scaled the peak to raise money for Samaritan’s Purse, while Jessica climbed to benefit Mission Gate Ministry’s Hannah’s Ranch Women’s and Children’s Home in Cuba.
“I had been thinking about (climbing Mt. Kilimanjaro) since we did Serengeti Trek for (Vacation Bible School) several years ago,” Matt said. “It’s one of the seven summits of the world and the idea of doing it was appealing. Plus, technically, it’s an easier climb than the others.”
Matt has been the pastor at Center Point Baptist Church in Steelville since 2003 and works full-time at Meramec Instrument Transformer Company in Cuba as a tester and line supervisor as well. He also served in the U.S. Navy from 1982 to 2002 as a P-3 flight engineer. Matt and his wife, Sharon, are both Steelville High School graduates—Matt in 1982 and Sharon in 1985.
“Sharon has been involved in Samaritan's Purse, through Operation Christmas Child, for over 10 years and has been a leader in our region collecting donations for distribution to children in crisis areas and underprivileged communities all over the world,” Matt said.
That’s why Matt chose to climb to raise awareness and money for Samaritan’s Purse, collecting about $1,500 in donations. Samaritan’s Purse recently published a story about his climb (included in this story) that was published online.
Matt is also very active in football. He coached a club team in Steelville for five years and is now a high school referee, working along the I-44 corridor from Cuba to St. Louis. He also does some work in the Waynesville area.
Jessica has been working at Cuba Manor for about two years and recently started classes at East Central College’s Rolla campus. She is working to become an LPN. She is a 2010 graduate of Cuba High School.
Jessica raised about $3,000 for Hannah’s Ranch. While she is not involved in the local nonprofit, she said she likes its mission. For more information visit https://missiongateministry.org/hannahs-ranch.
After reaching the top of Africa over the course of seven days, the Cooks came down the peak in only about a day. “They really wanted us to get back to basecamp at about 16,000 feet as soon as possible,” recalled Matt, “and then below 10,000 feet to avoid altitude sickness.”
Matt said he and his daughter don’t have any formal plans for another mountain ascent, noting it was a once-in-a-lifetime experience. But, it was one he will always remember.
“That area in Tanzania was beautiful and the people were beautiful,” Matt said. “We were there about five or six other days and we really enjoyed the area and the people.”
The Samaritan’s Purse story was written by Sarah Rodriguez, who is a social media specialist in the organization’s communications department. It was published at samaritanspurse.org on August 19. It is being reprinted with their permission.

Pushing Themselves to the Limit—For a Good Cause
By Sarah Rodriguez
MISSOURI FATHER AND DAUGHTER CLIMB MT. KILIMANJARO, RAISE SUPPORT FOR SAMARITAN’S PURSE.

Matt and Jessica Cook stood satisfied at the summit of Mt. Kilimanjaro staring out at a carpet of clouds hovering nearly two miles below them. The father-daughter duo from Cuba, Missouri, had reached Africa’s highest peak—19,341 feet above sea level—after an almost weeklong test of strength and endurance.
With a love for Samaritan’s Purse and our Operation Christmas Child shoebox ministry, the Cooks were glad their expedition had raised support and spread the word about our ongoing relief efforts in Jesus’ Name.

A Dormant Dream Awakens
The dream to climb Mt. Kilimanjaro first crossed Matt’s mind 18 years ago when his church was putting on a Vacation Bible School called “Serengeti Trek” and the famous peak was featured in the week’s activities. For more than a decade the dream lay dormant, just like the volcanic mountain he would one day summit.
But then, Matt decided it was time to see if his dream could become a reality. After convincing his daughter Jessica to join him on his quest, the two began training. Intending to train with hiking, calisthenics, and weightlifting for a little over a year, the Cooks planned their trip for February 2022.
Unfortunately, plans changed at the last minute and the trip was postponed until summer 2022. But on Father’s Day 2022, the father-daughter pair stood together on the top of Africa after completing the strenuous climb.

Toward Higher Ground
But the climb wasn’t easy.
“There were times where we would see the trail ahead and be a little intimidated or wonder how we were going to get there,” Jessica said.
In the end, it was worth it. After six-plus grueling days of uphill climbing, they reached Uhuru Peak and celebrated before heading back down the mountain.
“I kept looking ahead of me because I wanted to see where the summit was and get there because we realized that for the last two years, we’ve been committing ourselves to this goal,” Matt said. “And we were about to reach it. And I think the closer we got to it, the more excited we got. But there was some beautiful scenery on the way. And I just kept thinking about the verse [Philippians 3:13] where Paul says, ‘Forgetting what is behind and straining towards what is ahead,’ and that word actually really meant a lot to me because I was straining.”
The entire journey took eight days—more than six days of steep climbing and acclimation to the elevation changes, and then a day and a half back down to the trailhead. Before Matt began the journey, he prayed that God would speak to him on the mountain and the Lord was faithful, teaching Matt about patience and following the Lord’s leading.
Throughout the entire expedition, Matt sensed God’s presence as the hymn “Higher Ground” came to mind: “I’m pressing on the upward way, New heights I’m gaining ev’ry day; Still praying as I’m onward bound, Lord, plant my feet on higher ground.”
Jessica learned similar lessons. “Sometimes I feel like I don’t really know what God’s doing in my life. So, I would say it’s OK to be in the dark, you know, you just got to trust your guide, who would be Jesus, and walk in His steps, and you’ll make it to the top and see the sunrise,” Jessica said.

More than a Hike
Matt, who serves as a bi-vocational pastor, knew from the start of his preparation that he wanted to use the expedition to raise funds for Samaritan’s Purse.
Matt’s church, Center Point Baptist Church, is a yearly participant in Operation Christmas Child shoebox packing. His wife, Sharon, coordinates the church’s year-round efforts as the small church of 65 attendees regularly packs 200 shoebox gifts.
The Cooks said they love knowing that children are filled with joy as they receive shoebox gifts. Even more important, they are thrilled that the Gospel message is presented at each shoebox outreach event. Children and their parents all learn about the Greatest Gift—Jesus Christ.
Beyond Operation Christmas Child, the Cooks are also passionate about Samaritan’s Purse’s current work in Ukraine. Matt, a former flight engineer himself, is particularly enthusiastic about the doors opened for the Gospel through aviation.
Since the conflict in Ukraine and the surrounding region, we have completed 27 airlift missions to transport relief supplies, and we have distributed more than 21,160 metric tons of food within Ukraine in partnership with local churches and organizations.
“Because of our love for the ministries of Samaritan’s Purse, and specifically Operation Christmas Child, we wanted to do something that would benefit them,” Matt said.
Some friends supported the Cooks by donating per milestone markers along the trip. Others made a simple donation in honor of the Cooks’ climb. Even Matt’s company contributed funds and Matt was able to share with them about the critical relief efforts of Samaritan’s Purse.

For a Greater Purpose
Pushing their bodies to the limit over a 16,000-ft. climb to reach the top of Africa, the Cooks learned much about their relationship with Jesus Christ. They also got to support work that is important to them: helping people in need with the purpose of sharing God’s love through His Son, Jesus Christ.
If you’re interested in using your unique talents and interests to support what God is doing through the worldwide work of Samaritan’s Purse, visit our fundraising resource page (https://www.samaritanspurse.org/our-ministry/fundraise/). 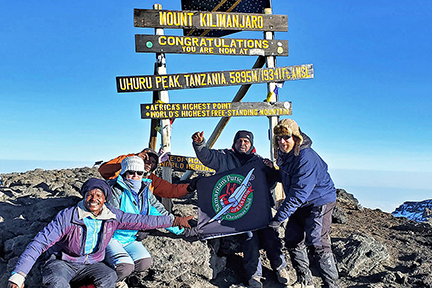 The Cooks, with their guides, celebrate at the top of Africa. 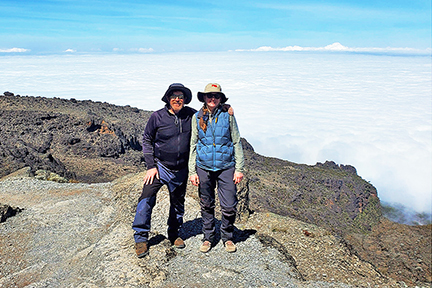 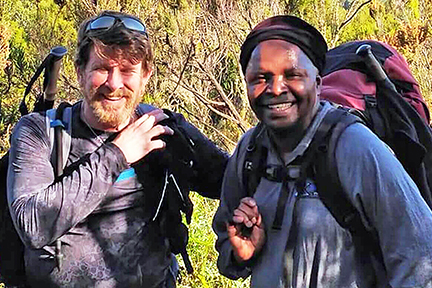 Matt and his senior guide, Meckson, hike Kilimanjaro together. Meckson, who is also a bi-vocational pastor, was quite familiar with Samaritan’s Purse and Operation Christmas Child.