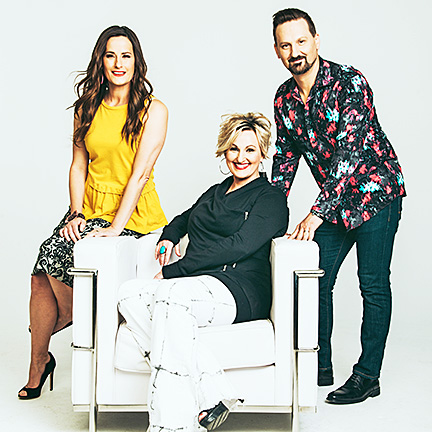 The smooth, rich sounds of multi-Dove Award winning and multi-Grammy nominated trio, The Martins will be featured in Steelville, Missouri at the Meramec Music Theatre, located at 26 W Hwy 8 West, on Saturday, November 5 at 6 p.m.

Siblings, Judy, Jonathan and Joyce Martin, who grew up in rural Hamburg, Arkansas, have enjoyed countless radio hits and performances on stages at such prestigious locations as The Grand Ole Opry and The White House, as well as concert halls, auditoriums and churches nationwide.
During the 1990s, The Martins rose to national and international success, showcasing their stunning and distinctive harmonies before a vast array of audiences, from Bill Gaither’s multi-award winning Homecoming Video and Concert Series to the White House to Carnegie Hall. Over the years the trio garnered eight Dove Awards from the Gospel Music Association, three Grammy nominations and multiple hit songs.
After nearly a decade of pursuing individual music careers, the trio reunited in 2010, much to the delight of long-time Martin music lovers, and released their first new recording in 10 years, New Day, produced by Jay DeMarcus (Rascal Flatts).
In 2014, The Martins joined renown arranger, Lari Goss and long-time friends and producers, Michael English, David Phelps and Matthew Holt to record a new a cappella hymns project. The recording, simply titled A Cappella was released in May of 2014, and features The Martins’ unmatched and unmistakable family harmony.
The Martins returned to the recording studio to produce their latest recording. Still Standing, released in July 2018 under the Gaither Music Group label, has afforded even more success for the popular trio. This recording, which received the 2019 Grammy nomination for Best Roots Gospel Album, finds the vocal group standing stronger than ever, showcasing their benchmark family blends and intricate arrangements produced by renowned producer Gordon Mote. These compositions reflect the latest chapters in siblings Judy, Joyce and Jonathan’s journeys as they share messages of God’s goodness and providential hand at work in every season.
Join The Martins as they share their trademark harmonies in Steelville, Missouri at the Meramec Music Theatre on Saturday, November 5 at 6 p.m. Complete information is available by visiting  www.martinsonline.com or by calling 573-775-5999.