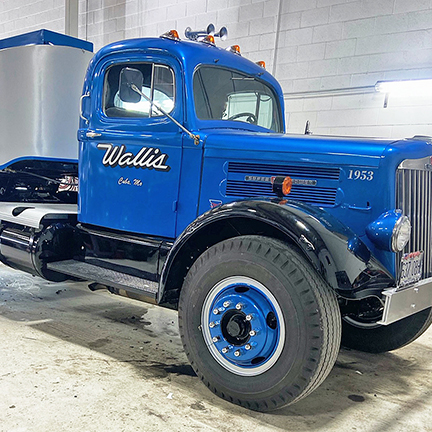 A tanker owned by Wallis Companies is going to be featured in three upcoming episodes of the Motor Trend channel’s show Texas Metal. The first episode is set to air on January 25 at 8 p.m.

The series will feature an overhaul of a historic tanker truck owned by Wallis. The company acquired the truck, which is known as “Old Pappy” when it acquired Jefferson City Oil two years ago.
As part of the acquisition, which was completed on January 2, 2021, this tanker found a new home at Wallis Companies. It is a 1953 White and 1951 Fruehauf fuel trailer with a 4,000-gallon capacity. When Wallis acquired it, the truck and trailer were in fantastic condition for being almost 70 years old and truck was still running great.
A book has been kept in the cab of the truck, proudly documenting the life of it and the trailer. Old Pappy had a long history of colors and styles and Wallis Companies updated it with their colors and logos.
Part of the facelift included work under the hood that put the truck in almost as good as new condition. The truck got blue paint to match the Wallis Transport fleet and branded magnetic logos were created to put on the truck and trailer. The idea was to use the truck during community events and in local parades as a nostalgic and fun way for showcasing the Wallis brands.
Last year, Wallis employees took the truck to Houston, Texas, and left it with Ekstensive Metal Works, which is the company featured in Texas Metal, for another overhaul. The series will feature work done on the truck before a surprise reveal to Wallis Companies owner Lynn Wallis in the final episode.
Ekstensive Metal Works was founded by Bill Carlton in 1994 and is one of the most respected custom automotive design and fabrication shops in the country. The company has been featured on Texas Metal for the past five years, with season six starting on January 18. You can find out more about the show and the company on Facebook @TexasMetalTV or at ekstensive.com.
Wallis Companies, which owns all the On the Run convenience stores in the area, including ones in Cuba, St. James, and Steelville, is headquartered in Cuba. The company was founded in Cuba in 1968 and now employees more than 1,100 people. In addition to operating convenience stores, Wallis’ portfolio includes transport, lubricant, wholesale, commercial fuels, and car wash divisions.

Old Pappy has seen several color screens and graphics combinations during its life, including this one featuring Conoco.