The municipal election for 2020 will be held on Tuesday, June 2. The election date was moved from April 7 due to the ongoing COVID-19 pandemic. All ballots for this election are dated April 7 but have been validated by the Missouri Secretary of State’s office for the June date. 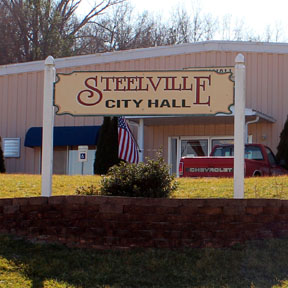 Current Steelville Mayor Michael “Tiny” Keen faces three challengers in his bid for re-election. Voters will select the mayor for the next two years at the June 2 election, rescheduled from April due to the ongoing coronavirus pandemic.
Each candidate was given the opportunity to write their own profile in order to present themselves to our readers and discuss their opinions on any issues they felt were important to the voting public. Candidates were invited to include details about family history, work experience, education, or other traits they felt voters should know about them.
Their submissions were edited only for grammar or spelling mistakes, not content. All candidates were given the choice to either submit a photo or have our office take one for them.
The four candidates for the role of mayor are Keen, John (Terry) Beckham, Curtis Crouch and Jennifer Hurd.

Terry Beckham
I am running for election to mayor of the city of Steelville.
For those of you who do not know me, I will provide a little bit of background information. I was born and raised in Steelville and graduated from Steelville High. After a couple of interesting years in the Army, I attended college and obtained a degree in accounting and a master’s degree in business administration. Most of my work experience has been in government contract and internal auditing, including over 25 years with the Army Corps of Engineers. I have a grown son and daughter and four grandchildren.
I have served as an alderman for Ward 2 for the last 10 years. It is only recently that I have decided to run for mayor. It is not a decision that I take lightly because the job requires commitment and the willingness to take a hands-on approach. Showing up at an assembly meeting twice a month does not get the job done, too many things fall through the cracks.
For example, you have probably read about the problem the city is having with our accounting system and getting timely reports to the newspaper. If I am elected mayor, I will make this issue a top priority. There is no reason we should not have a reliable first-class accounting system. I will make sure that we put the resources and training into making it happen.
I would like to thank those of you who have supported me in the past and I hope to be able to help the city meet the challenges of the future.

Curtis Crouch
I came to Steelville from the north end of Highway 19 above I-70 in Wellsville, Mo., in September 2002.
I worked for J.T. and Sharon Ransom the first year and a half. In March 2004, I opened T&C Appliances in the building across from the post office. In 2006, Peoples Bank helped me purchase a building at 111 N. First Street. After much renovation, we located there and operated fairly smoothly for the next 12 years.
In 2018, a young man of good character (Nathan Jacobson) purchased the appliance business from me with the understanding I would stick around a couple of years to help him get launched. He is now running under his own steam and building his own reputation.
So now it’s 2020, I’m 60 years old, with somewhat less responsibility. I would very much like to give back to this community that has been so supportive of me and my efforts to scratch out a living in my time here. So I offer for your consideration myself and my time to be your mayor, having some experience in and with municipal government from my time in Wellsville—being twice elected to a council seat while in my 30s, also sitting on and being involved with various boards and committees during my life.
My thanks for your consideration.

Jennifer Hurd
My name is Jennifer Hurd, and I am running for mayor.
I have been married for over 17 years to Dale Hurd. We have three amazing children—Cole, Halana, and Jazmyn—who all attend Steelville Schools. I am the children’s director at NHIM Fellowship Church. I have lived in Steelville for more than 20 years. During this time, I have volunteered many hours in the community. I have served for 10 years on the Steelville Sports Club Board, and I currently hold the position as president of the Steelville Park Board for the past three and a half years.
My work experience consists of working for San-Val in Steelville, at Phelps County Hospital, first in the kitchen, then in the billing office for a decade as a payment processor, and I worked at Covenant Praise Church for three and a half years as a secretary/clerk. Currently, I run a daycare out of my home.
During my time as park board president, we have overseen the construction of a new pavilion at Hoppe Spring Park, as well as numerous improvements to the city park and pool. We are currently working on improving the look of Hoppe Spring Park. We are planning to plant shrubs and small trees along the bank of the park. We also would like to plant flowers around the schoolhouse and add a couple of new play items for the children.
As an active member of the community, I am running for mayor because I know I can do the job. I have attended many of the city council meetings and read the minutes to stay current on the workings of the city. I feel with all the issues going on in the city that we need to update our ordinances. We need fresh ideas for Steelville. We need to upgrade our computer system to make it more efficient. This will help with the auditing issues also.
Our small community needs to work together to improve this town. We need to improve the communication between the council and the voters by ensuring our financial statements are published. We also need to update the city website to make it more appealing for voters to read.
We need to encourage the citizenship to get involved in community boards such as the tourism committee and park board.
We need to find ways to improve the city budget by planning ahead for equipment failure.
We need to support our police department so they can protect and serve us better.
Small towns are like family and they stick together. Steelville proves that every time we have a team or a player in our district that excels and every time there is a family who has a tragedy happen in their family. I love my town of Steelville and would be honored to serve as the mayor.
A vote for me is a vote for Steelville!

Michael Keen
I am 50 years old, my parents are deceased, I have one daughter and granddaughter, I have one sister and nephew. My life has been working and volunteering in public safety.
I have been mayor for four years. In that time, I have helped better each department of the city with better lifesaving and everyday equipment. We have also hired extra staff to help protect and service the city’s needs.
As far as personal life, yes, I have been dealing with some fractures and diseases (non-communicable). I have been living in the nursing home due to no family who could live with and help me at home. Yes, I have missed some meetings over the last two years while dealing with my health, however there have been competent people to run the city in my absence.
Throughout my time as mayor, I have strived to be transparent in the city’s business.
I have felt it has been an honor to work for the citizens of Steelville and would like to continue serving as mayor if you, the citizens, choose to let me serve in the position.

Plans will move forward with the bidding process for the traffic flow and parking area in the front of the downtown campus of the Steelville Schools, but school board members expressed their discontent with costs that have been well over the estimates for the capital improvement projects funded through a no-tax-increase bond issue approved by voters in 2019.

There will be fireworks in Steelville for the Fourth of July, but the annual Freedom Fest will not take place as it has in the past.
Steelville Area Chamber of Commerce President Tamra Cape approached the city council at its meeting on Monday, May 18, to discuss potential plans for this year’s Fourth of July celebrations.

The Steelville School District is planning for the potential decrease in funding as a result of the ongoing coronavirus pandemic, in addition to preparing for the need for more technology and continuing to provide quality education. Superintendent Mike Whittaker assured the board at their May 21 meeting that the district is currently in good financial condition, but he also urged caution moving forward as a result of the uncertain economy.